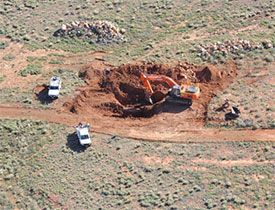 Another innovative application of X-Info Connect within the APA Group allows flight contractors to load data directly to be accessed live by APA Group management and submitted to the work order system.

The applied solution has optimised flow of aerial sighting data, reduced double handling by both the contractors and APA Group team and built a detailed baseline database with easily accessible tabular, graphical and spatial reports.

From the Air to the Desk: Managing Aerial Patrols at APA Group

APA Group requires regular aerial patrols and surveillance to provide early detection of hazards that may be detrimental to the operation of the pipelines they own or operate. Aerial Sighting information was historically submitted by the contractor to different state offices on a burned CD with a Word document and photos. With the renewed National Aerial Program the team at APA looked for a system that would allow streamlined communication of sightings between the flight contractor United Aero and the team back at the Dandenong office.

As APA continues to expand the applications of X-Info Connect throughout their business operations, the X-Info Connect software was an easy solution to apply for this case.

A new Connection was tailored specifically for the Aerial Patrol to record detailed information about each survey and sighting record. Captured information includes flight details, dates, times, coordinates, sighting categories and classifications as well as comments, photos and maps. Together, this information can clearly identify potential pipeline hazards and communicate the birds-eye perspective from the United Aero operators to the APA team on the ground.

Mipela GeoSolutions worked closely with United Aero and APA Group to simplify the data entry process, taking into consideration the cramped working space inside a Cessna and multi-tasking requirements for the United Aero pilot and observer. After minimal post-processing to match photos to sightings, United Aero can now import the results directly into 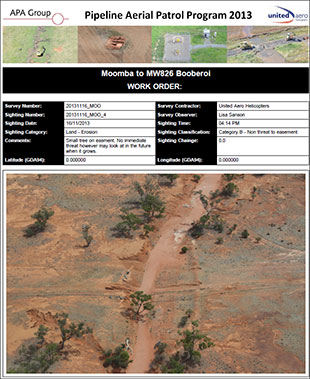